"Free market" GOPs have propped up farmers, other businesses. Do they and others get cut off in 2021?

Not that you should have believed it anyway, but over the last few years, Republicans have shown that their adherence to "free market, small government solutions" is a standard that shifts a lot, depending on the individuals you are talking about. GOPs also believe in bailouts and using government resources and laws to redistribute wealth - they just choose different groups to help vs hurt.

All of a sudden Mitch McConnell and Senate Republicans are worried that someone in America might get a $2,000 check "who doesn't need it."

Funny. They had no problem giving a $1.4 billion tax break to Charles Koch and his family with a net worth of $113 billion. What hypocrisy!

Another group that Trump/GOP has favored in recent years is farmers. This is ironic because Trump's Ag Secretary told dairy farmers in late 2019 that agri-businesses shouldn't expect any help at all.

"In America, the big get bigger and the small go out," Perdue said after an appearance at the World Dairy Expo in Madison. "I don't think in America we, for any small business, we have a guaranteed income or guaranteed profitability."

But in fact, farmers received huge amounts of targeted aid in 2020, allowing them to receive the highest level of income for the last 7 years .

The U.S. Department of Agriculture's Economic Research Service estimated in their latest farm financial forecast that net farm income will hit $119.6 billion in 2020, a 41 percent increase from 2019 and the highest income level since 2013. Paul Mitchell, director of the Renk Agribusiness Institute at the University of Wisconsin-Madison, said the forecast is slightly higher than last quarter’s estimate, partly because of a price rally for corn and soybeans seen around harvest time.... Earlier forecasts also did not include the $13.3 billion expected to be paid to farmers through the second round of the Coronavirus Food Assistance Program (CFAP). That means farmers are now expected to receive $46.5 billion in direct government payments. That’s $24 billion more, or 107.1 percent higher, than in 2019. By comparison, farmers received just under $13 billion in direct government payments in 2016. 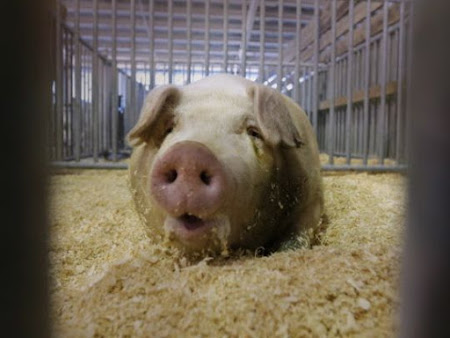 ---------- Oink, oink! -------- This reliance on business owners needing government support is apparent in other ways. I originally noticed this part of November's income and spending report, which dropped in late December.

The consumption drop was a big red flag on its own, but the loss of income was sizable, and seemed to also be an economic problem. But then you look at the supplemental report that touches on the impact of the CARES Act and other COVID-related assistance, and there is a central reason to that drop in income for November. It's reflected in the green line on this chart. 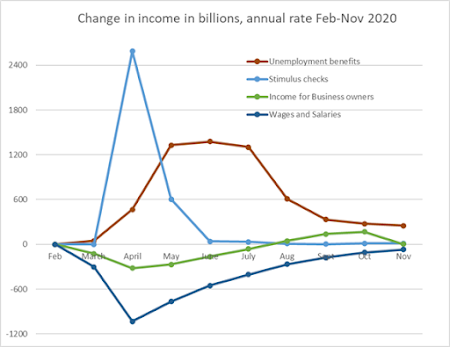 Then you dig down a bit deeper, and you see that the loss in business income in November is because of 2 reasons. 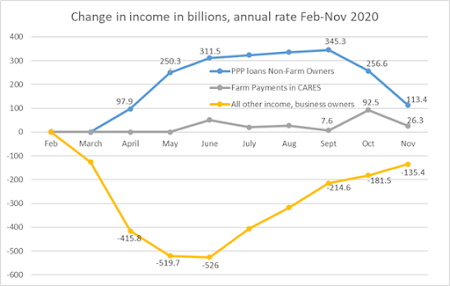 Look at the declines for both PPP assistance, and the CARES aid to farmers (and the convenient jump in farm aid 1 month before the election). You can especially see how the 6-month timeframe for the first round of PPP funding sunk in, and is now fading. It helps explain why the latest stimulus bill included $284 billion in new PPP loans, to keep businesses afloat through the COVID Winter - it's really the only federal help that restaurants and some other hard-hit service businesses are getting for 2021. But at the same time, it took a lot of grinding just to get $600 (or less) sent out per person to get through the same COVID Winter. And while unemployment benefits were extended, and given a $300 add-on for the next 11 10 weeks, the time between now and March is traditionally the time when the largest number of seasonal layoffs happen. Once we get to March, and 12 months of the COVID World, all of these temporary measures that propped up incomes through 2020 go away. And if there haven't been enough people vaccinated to allow for crowds to return to inside venues and other industries, are we going to continue to prop up a still-depressed economy? Especially now that GOPs will see no reason to care about the typical American, and will be more than willing to blame the bad situation on the Democratic President and the Dem Governors that are up for re-election in 2022 in a lot of states that have voted GOP in the past (including Wisconsin)?
Posted by Jake formerly of the LP at 11:24:00 AM