Wisconsin jobs bounce back in December, but still in a big hole as 2020 ended

While the United States lost jobs for the first time in 8 months in December, Wisconsin went the other way. We had a big, seasonally-adjusted gain after a couple of months of losses.

…The data shows that Wisconsin total non-farm jobs and private-sector jobs increased 15,100 and 19,200 respectively. Wisconsin's unemployment rate for December was 5.5 percent, up from November's revised rate of 5.3 percent. 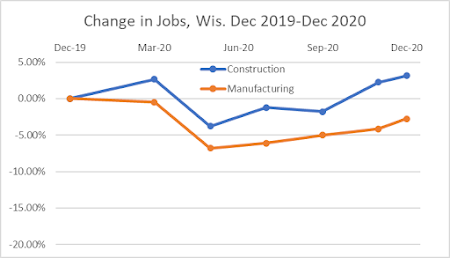 On the service side, retail (+8,500) and health care/social assistance (+3,200) had a good jump to end 2020. But bars, restaurants and lodging (-1,600) continued to get hurt from Wisconsinites continuing to social distance as COVID stayed high and temperatures got colder. Arts and other entertainment-related industries also dropped in December (-600) as shows and sporting events were still limiting or outright banning attendance. Those “going out”-related industries had an awful 2020, and a sizable amount of Wisconsinites that were working in those industries at the start of the year were out of work by the end of it. It also was a bad month for state + local government (-4,200 jobs in December), and nearly 1 in 10 of those types of jobs went away last year. 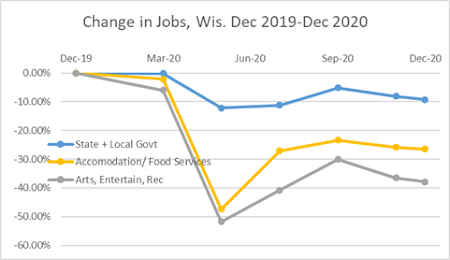 Along the same lines, a Forward Analytics study on “The COVID Economy” was released on Monday. It illustrates how a large amount of the job losses in Wisconsin have come in jobs where people weren’t making much money to begin with.

The two industries most impacted by the pandemic, the arts and entertainment industry and accommodation and food service, have a significant number of low wage jobs. Average annual pay in the accommodation and food service industry was $16,500 in 2019. In the arts and entertainment industry, it was $31,300. These average pay rates are well below the statewide average for all jobs in Wisconsin ($50,413). While recessions typically are challenging for low-wage workers, this one has been particularly difficult. Figures from Opportunity Insights1 show that, as of mid-October, the number of low-wage jobs in Wisconsin was down 19.0% compared to February (see Figure 5 on page 8). The number of moderate-pay jobs had fallen 4.1%, while high-paying jobs were down less than one percent.

And there's no reason to think those depressed areas are going to bounce back any time soon, not as long as most Wisconsinites aren't vaccinated. So those job losses in 2020 might linger well into 2021. which means that targeted support might be necessary, beyond the small business support that is part of the state's "We're All In" program. These numbers will be benchmarked in about 6 weeks, so it's not the final word on just how much was lost in the Wisconsin jobs market in 2020. But we know that it was significant and hit some areas much harder than others, and that needs to be corrected in 2021 in order for this state's economy to return to decent health.
Posted by Jake formerly of the LP at 7:08:00 PM