Trump asked for more votes in Georgia, and may have found more in Wisconsin

You may have heard about a certain phone call involving our crooked President getting released. My ears perked up when I saw this passage.

Of course it's something that criminal, and in a functional country, would be grounds for immediate removal from office. But more than it being further proof of how horribly flawed American democracy is in 2020-21, it also made me wonder if perhaps the pre-election polling (that had Biden winning by 5-7% more than he did) wasn't as inaccurate as we were led to believe. I made this comment when I was reviewing the election results in November.

The first item I'll go into turnout, which is something I was wrong about. I said on Monday that if Biden got 1.6 million votes in Wisconsin, Trump had no chance and Biden would win easily. That wasn't the case, as Trump ended up getting more votes than any Republican has ever gotten in Wisconsin. Add in the third-party tallies, and turnout was nearly at 3.3 million votes, shattering the state record by more than 200,000, and going up by more than 10% compared to 2016. These increases were widespread throughout the state with one exception - the City of Milwaukee, which didn't see any additional turnout at all.

Well, what if Trump DIDN'T get 1.6 million votes after all? Let's go back to a couple of items I looked into at the time, starting with the places that Trump did better or worse in.

A familiar map of red and blue counties. Only Sauk and Door flipped, R->D

And then overlay it with a stat I created that took into account how much turnout increased in a given county, and then subtracted the population growth (or added for decline) in that county from 2016-2019. As this stat shows, the biggest growth in turnout in Wisconsin was generally in smaller, rural places, many of whom trended towards Trump. By comparison, Dane and Milwaukee Counties had much smaller increases in turnout. 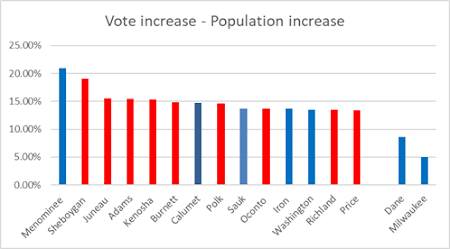 In fact, Milwaukee County had one of the smallest increases in turnout in the state, and the City of Milwaukee was basically flat vs 2016. This meant that Milwaukee's share of the electorate in 2020 was smaller than it was in 2016, and significantly smaller than it was during Barack Obama's elections. At the same time, outstate Wisconsin had its largest share in at least 12 years, as their votes went up bigtime. 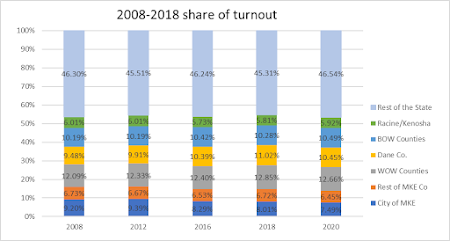 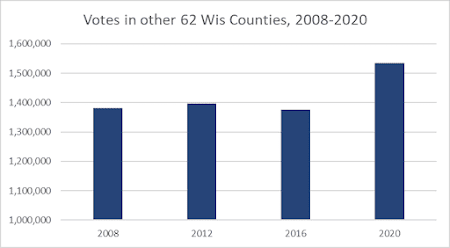 That's quite an impressive turnout operation in areas whose populations are stagnant or even declining, and it's a reason that this election was as close as it was in Wisconsin. If you look at that bar graph of 2012's turnout shares and compare it to 2020, you can see that the City of Milwaukee's share dropped from 9.39% in 2012 to 7.49% in 2020. If turnout was the same 3.3 million total in 2020, but with 2012's electorate, you'd have seen this result. Biden 50.0% Trump 48.3% And Biden's winning margin of less than 21,000 votes in Wisconsin >ends up being more than 57,000 - a close but relatively comfortable victory. Instead, there were 65,000 fewer votes in the City of Milwaukee (where Biden won just under 79% of the vote), and 34,000 more votes outstate (where Biden barely got over 42% of the vote). Given the news that emerged yesterday, I have a hard time believing that Donald Trump didn't make similar calls to states like Wisconsin, asking officials how he could "find votes" and "recalculate" totals. And perhaps he found a few of those extra votes in key GOP-leaning areas. And perhaps Ron Johnson knows it too, which is why he's claiming there are questionable results that should be looked into. If you look at the numbers, they are indeed questionable - in favor of Trump/GOP. And GOPs always project onto others the bad actions they would pull
Posted by Jake formerly of the LP at 8:00:00 PM