A story that re-emerged this week dealt with the issue of how to pay for Wisconsin’s many needs in transportation. And the leaders of both houses of the State Legislature both backed a new way to get money to pay for those needs – tolling.

Assembly Speaker Robin Vos of Rochester and Senate Majority Leader Scott Fitzgerald of Juneau described placing tolls around the state as a way to fix the state's highways and bridges.

"You can do it on bridges. You can do it in an awful lot of places. So I think there’s a lot more flexibility (on where tolls can be placed) and that’s why we wanted this study,” Vos said.

They said a tolling study would help guide lawmakers on the issue but emphasized they see it as the best way to pay for roads. But they came short of committing to implementing tolling in the state budget they pass this year. 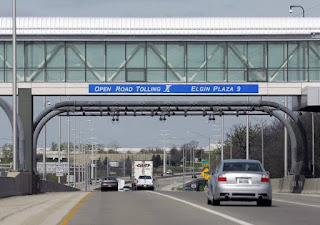 Heading North of the Illinois border?
Of course, we already had a study at the end of 2016 looking into tolling in Wisconsin, so I’m not sure what would be different from a new study in 2019. Well, unless Vos and Fitz weren't going to have the state run the tollways, but instead would sell them off like Scott Walker's Administration was reportedly thought about before the 2018 elections.

Gov. Scott Walker's transportation secretary told business officials and others last week he had talked to a London financier about selling off Wisconsin's highways but had rejected the idea.

Transportation Secretary Dave Ross told a group last week that Walker's administration was adopting new ways of getting its work done and mentioned in passing his discussion about selling off roads, according to people familiar with the meeting.

He then said he was not pursuing the proposal because Wisconsin has good contractors to maintain the state's roads.

I think we need a little follow-up from our media to have Vos and Fitz expound on how this "tolling" would bring in money to the state. But for now I'll assume the State of Wisconsin would be the ones running the tolls and getting revenues every year from it.

Another advantage of tolls in WisGOP World is that they can be construed as “user fees”, which would allow the GOPs to remain on the good side of no-tax right-wing oligarchs like Grover Norquist and the Kochs. Since other options to raise funds for highway work include raising the state’s gas tax for the first time in 13 years or upping the state’s vehicle registration fee for the first time in a decade (your local wheel tax doesn’t count), this likely plays into the GOPs’ calculus in backing tolls.

But it’s worthy to look at how much money we are talking about. Let’s start with the conventional options that could be instituted right away. If you look at the Legislative Fiscal Bureau’s paper from last month, it says that every 5 cents the gas tax is increased would result in $170 million a year in added revenue, and every $10 increase in vehicle registration fees brings in $47 million.

By comparison, if you look at the detailed part of that 2016 tolling study, you’ll see that it would cost $366 million up front to do a statewide tolling system, and it wouldn’t generate any money for WisDOT for 4 years as it was being built.

Which means tolling would do ZERO when it comes to fixing all of the Scottholes we have today and for the next 2 budget cycles. In contrast, Dem Assembly Leader Gordon Hintz noted that the gas tax would put money in the bank to pay for those road needs immediately.

[Hintz] dismissed the GOP leaders’ remarks during a question-and-answer session with reporters, saying Fitzgerald and Vos have been talking about tolling for years. He said tolling would take money to set up and “won’t happen tomorrow.” A gas tax increase would generate revenue more quickly, he said.

Granted, those up-front costs of tolling could be limited if you didn’t put tolls on all interstate segments in the state (as you can bet outstaters and Milwaukee commuters will demand), but that would be offset by less toll revenue. For example, the study said if tolling was limited to I-39/90 between Beloit and Madison and I-94 from the Milwaukee airport to the Illinois State Line, it would raise less money than raising the gas tax by a nickel.

But the Republican leaders claimed that increasing the gas tax isn’t going to solve the overall problem of having a steady source of money for the Transportation Fund.

Vos told reporters that he thinks a gas tax increase would be a short-term fix, at best.

“If we don’t have a long-term answer like tolling or something similar to that,” he said, “all we’re doing is putting a Band-Aid on a gaping wound.”

And Fitz claimed that even increasing the gas tax by a dime wouldn’t get the job done.

Fitzgerald says a 10-cent gas tax increase would raise more than $300 million, but he argues it wouldn't be enough to fix the state's roads.

Wait, so the WisGOPs are now admitting our highway deficit is more than $300 mil a year, and requires more money to be raised, which is why they’re calling for tolls? OK, then I got a solution to this quandary for Robbin’ and Fitz.

If we need to fix the roads, why don’t we use $300 mil a year of General Fund money over the next 4 years and send that to the DOT instead of blowing it on an unfunded income tax cut? Seems like a bigger priority at this point.

This doubletalk also puts the lie to the GOP meme of “our fiscal policies have put Wisconsin in great shape.” Because if we were in such great shape, we wouldn’t have so many Scottholes that we allegedly need to add more than $300 mil a year to get back on track. It also exposes that WisGOP’s legislative “leadership’s” call for tolling as a gutless piece of cynicism. It makes Vos and Fitz appear that they have a solution for the state’s many transportation needs, but it doesn’t do anything for the needs that exist today.

At the same time, WisGOP’s strategy tries to set up Governor Evers and other Dems as “tax hikers” for wanting to fix the roads NOW, while the gerrymandered GOP Legislature can block such a measure, and then stand by over the next 4 years whining “Why can’t Evers get the roads fixed like he said he would?”