Why Evers should stay course and end tax cut for manufacturers

The Wisconsin Budget Project has been a great resource for me over the recent years, and one of their analysts has an Op-Ed in Urban Milwaukee discussing tax policy in Wisconsin as the GOP Legislature's unfunded tax cut lands on Tony Evers' desk.

Tamarine Cornelius says Evers should stick with his plans, and help to pay for his proposed middle class tax cut by repealing the "Big Giveaway" tax credit for large manufacturers in Wisconsin.

All Wisconsin businesses depend on public investments in roads, workforces and communities to thrive. But this loophole gives manufacturers a special exemption from paying their fair share. That means that companies like Foxconn and Kimberly-Clark pay little or nothing in income taxes even before the state piles on the subsidies. In fact, an investigation by One Wisconsin Now showed that, in the four years between 2013 and 2016, Kimberly-Clark paid a grand total for $1 in state income taxes.

Businesses don’t need to create new jobs to receive this tax break. Even manufacturers that lay off workers, send jobs overseas, and close factories can receive the credit. There is no evidence that this tax break has any effect on employment.

Only about three out of every 1,000 tax filers get this tax break, but those that do get an average tax cut of about $23,000. Some multi-millionaires get seven-figure tax breaks, with no requirement that they expand their business or hire additional workers.

Evers wants to limit this costly, ineffective loophole and redirect the resources to put more money into the pockets of the middle class and working parents with low incomes. His proposal would allow manufacturers to use only the first $300,000 of income to claim the credit. More than $9 out of every $10 in revenue gained through capping the manufacturing credit would come from millionaires.

The manufacturing credit contributes to economic inequity by increasing the concentration of income and wealth in a few hands—hands that are most likely to be white, due to a long history of racial discrimination. Thanks to powerful interests that have rigged the tax code to their advantage, Wisconsin residents with the highest incomes pay a much smaller share of their income in state and local taxes on average than other taxpayers.

Cornelius is referencing the “Who Pays?” report from the Institute for Taxation and Economic Policy, which showed last year that it's the middle and upper-middle classes that pay the highest percentages of their income in taxes in Wisconsin. 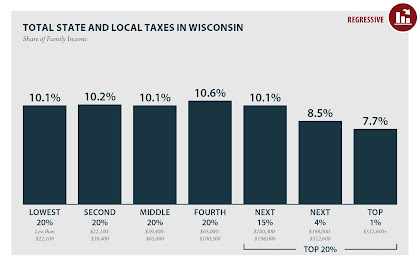 Let me also reiterate a point I’ve made a few times on here. Manufacturing corporations in Wisconsin have gotten other tax and policy breaks on top of the M&A credit in recent years. They include:

1. The GOP Tax Scam at the federal level, which featured a significant cut in corporate taxes that have artificially inflated earnings.

2. Wisconsin’s repeal of most of the personal property tax, which just took effect this year and includes most types of business equipment. Not only are manufacturers not paying as much, but it shifts the burdens onto homeowners to make up the difference.

3. Manufacturers have also been allowed to cut corners due to Walker-era deregulation. In addition, the GOP’s union-busting policies have helped lead to Wisconsin having the lowest manufacturing wages in the Midwest.

What did we get from that? Bottom-half job growth for 7 straight years, Scotthole-marked streets and lousy wages. And don’t buy the BS from Republicans about “great job growth in Wisconsin manufacturing in 2018.” Like most recent years, this is highly likely to be revised down by thousands of jobs when the jobs figured are benchmarked to the “gold standard” QCEW next month. 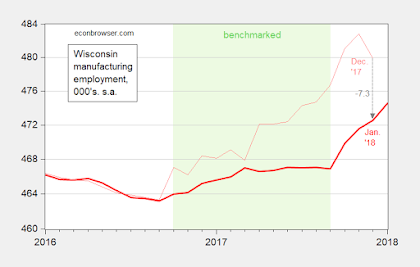 In light of this awful performance by state businesses, I’m supposed to cry tears for the possibility of the largest manufacturers having to pay back a fraction of what they’ve taken in recent years? Especially since those funds would be used to help middle-class Wisconsin consumers with a tax cut while increasing the ability to maintain public investments that benefit manufacturers more than most Wisconsinites? I dare Robbin’ Vos, John Nygren and other GOPpuppets try to justify Diane Hendricks continuing to get a tax cut of millions while infrastructure, schools, and quality of life deteroriates across the state.

WMC and the other RW puppetmasters can shut up, sit down, and be glad Evers isn’t asking for more, because I bet the average Wisconsin voter is sick of the 8 years that corporations have gotten a free ride in this state, especially since there hasn't been much of a benefit for people that aren't CEOs and the politicians they bought.
Posted by Jake formerly of the LP at 8:48:00 AM