Right now, a large debate is happening in the State Legislature over the best way to cut taxes for middle-class Wisconsinites. Katelyn Ferral had a good breakdown in the Cap Times on the “dueling tax cut proposals” between the two parties, and I'll let her describe the topline issue.

The main point of disagreement between Democrats and Republicans is how their respective plans would be funded.

Republicans want to tap into budget reserves to fully fund the tax credit for the next two years. Democrats want funding for their plan to be tied to narrowing the Manufacturing and Agriculture Tax Credit, which would effectively raise taxes on some manufacturers and redistribute that money to pay for the individual income tax cut. Democrats argue that relying on budget reserves to fund the whole individual income tax cut is irresponsible and argue that reducing a tax credit to pay for a new one is a more sustainable route.

Republicans say that effectively raising taxes on some manufacturers to reduce taxes for others is unnecessary and a deal breaker. They argue that there are enough budget reserves to both cut taxes for the middle class and maintain a low tax burden on all manufacturers and farmers. …

Overall, the approximate cost difference between the two plans is $147.4 million in reserve money. Either way, the state would tap its reserves to pay for the cut, it's just a matter of how much and if another state tax credit is altered in the process.

Let's start with the proposal revealed this week by Governor Evers and other Democrats. It would cost $144.4 million in the 2020 fiscal year, and just under $204 million in FY 2021. The Governor's press release on the subject says the tax cut will come from a few sources, depending on the income level of the filer.

In addition, the Evers plan will rollback a Republican giveaway to some of Wisconsin’s highest earners by capping the Manufacturing and Agriculture Credit (MAC) for manufacturing claimants. Agricultural firms would continue to have the credit as it exists under current law.

The Evers/Dem plan has the tax cut be retroactive back to January 1, meaning it would likely lead to larger tax refunds this time next year. By contrast, the GOP’s tax cut doesn’t take effect until next year. There is a minor change from what we previously knew about the GOP's plan in that the state’s withholding tables would now be adjusted on January 1st, instead of waiting until July 1. But otherwise, the parameters are the same (targeted relief for married couples making under $155,000, or single filers making $127,400).

As a result of the pushing back of the change in the withholding tables, the LFB says this means that the GOP tax cut will start to pay out in the 2020 Fiscal Year, instead of having it all come in Fiscal Year 2021 as originally projected.

That last part is intriguing, as it is possible that the WisGOP tax cut ends up causing some of the same problems that we’re seeing with the GOP’s Tax Scam at the federal level – where the larger standard deduction makes it a bad choice to take writeoffs for home ownership and donations to charity.

So what happens to the overall budget under each of these tax cuts? Well, there's a sizable hole to fill all budget requests in the next budget under either, but the Dem proposal makes that hole smaller. 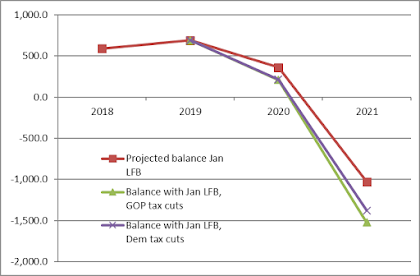 The GOP plan also makes the one-year deficit and cut in revenues larger than the Dems' plan. As you can see, both plans require a reduction for some of the big budget requests in year 2, but the GOP's unfunded tax cut leads to a bigger hole in both the short and long term, which is why Evers has spoken out against it. 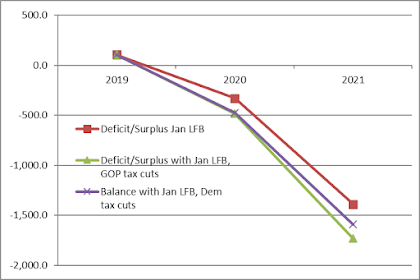 And Evers is right to do so. Given that economic growth is supposed to be slow, and Wisconsin seems to be especially vulnerable due to the combination of awful weather and numerous layoffs from companies like Shopko, an unfunded tax cut carries a lot of risks, and a high likelihood of a structural budget deficit opening up within 2 years that requires painful budget cuts or tax hikes on more people than corporate manufacturers.

Which is the real reason the GOP's are trying to do it the way that they are - to tie Evers' hands for the future. And it needs to be called out as a the cynical BS as it is.