Local jailers might be removed from Act 10? Why not state prison staff too?

We’re starting to see bills getting sponsored and introduced into the Wisconsin State Assembly, and this one jumped at me.

This bill classifies county jailers as protective occupation participants without a requirement that their principal duties involve active law enforcement or active fire suppression or prevention. The bill defines county jailers as persons employed by a county whose principal duties involve supervising, controlling, or maintaining a jail or persons confined in a jail, regardless of whether the jailers have been sworn regarding their duties or whether they serve on a full-time basis.

Basically, this would take county jailers out from under the restrictions of Act 10, and treats them the same as the police and fire fighters that were exempted from that law as a political favor for supporting Scott Walker in 2010 .

That bill calls back to something that I think Gov Evers should include in his first budget – restoring similar status and collective bargaining rights for the state’s prison guards and other staff at the Department of Corrections. Not only is it fair to include these workers with the law enforcement workers who are exempt from Act 10, but it may help to relieve the massive understaffing problem at state prisons. 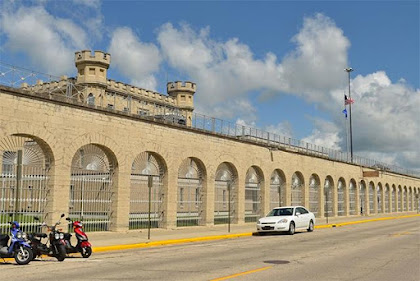 Someone's got to want to work there.
Let's go back to a report to Wisconsin's Joint Finance Committee from last month that went over the increasing amount of overtime that has been required at state prisons, which underscores the understaffing problems at those facilities

From FY16 to FY18, overtime increased by $7,466,067 and 246,427 hours. Position vacancies account for the greatest increase in overtime from FY16 to FY18. Vacancies cause current staff to fill designated shifts and results in increased overtime. The Department of Corrections (DOC) is constantly evaluating ways to increase staff retention and reduce overtime costs.

What’s also interesting is that this report splits up the reasons as to why overtime was required, both by facility, and overall. And it further underscores that much of the reason for the OT is understaffing in general, and another complication of the lack of staff – having to cover for other staff that are out due to illness.

And if you go the Department of Corrections’ budget request, they are counting this to continue, as it plans on $61.2 million a year for overtime costs in salaries and benefits. That doesn’t seem like a sustainable situation, so it may be time to discuss not only whether it’s productive to spend more state tax dollars on Corrections than we do for the UW System, but also whether these smaller communities can provide the work force needed to staff these facilities.

And now let's go back to the bill that would give bargaining rights back to local jailers, and note that it is being sponsored by several members of both parties. It’s spread pretty evenly between the 2 parties in the Senate - 7 Democrats and 5 Republicans – but is overwhelmingly Republican in the Assembly (28 R’s, 5 D’s). Given those figures, you would think that giving rights back to Corrections staff seems like a logical place where bipartisan agreement can exist.

In addition, restoring the pre-Act 10 rights for Corrections staff could allow for cost savings because people will want to take and keep the job, reducing the exploding OT costs, and possibly reducing higher liability costs due to issues that inevitably sprout from understaffing.

It’s also interesting I saw the "remove Act 10 for local jailers" bill be proposed on the same day as this occurred.

Braved the cold this afternoon to visit employees at the Department of Corrections and to thank them for their hard work on behalf of the state of Wisconsin. pic.twitter.com/aYClO6OoXm

So why shouldn't Gov Evers to push the issue of restoring collective bargaining rights and improving working conditions for Corrections staff? The GOPs in the Legislature are going to be stuck in a helluva pickle if they say “No”, and not only because so many of them are sponsoring a bill to restore bargaining rights to jailers at the local level.

If Legislative GOPs refuse to give collective bargaining rights back to Corrections staff while pushing it for local jailers, it would eradicate their arguments about being “the party of law and order” and “the party of fiscal responsibility.” We’ve seen how Corrections staff has been mistreated in the post-Act 10 world while costs continue to go up, and I’d love to see the GOP justify continuing that lose-lose outcome for the future.
Posted by Jake formerly of the LP at 12:29:00 PM