WisGOP comes around to giving more to public defenders. So what will they cut?

Once a Dem wins the governorship and steps up on criminal justice issues, it’s interesting to see how quickly Republicans at the Capitol start to care about not having a third-world legal system in Wisconsin.


Their plan would cost about $50 million over two years, according to Republican Rep. Mark Born of Beaver Dam, who sits on the budget-writing Joint Finance Committee.

"These initiatives are tough but smart on crime," Born said at a news conference in the state Capitol….

Wisconsin pays private attorneys $40 an hour to represent criminal defendants when the State Public Defender's office can't handle the work. That's the lowest rate in the nation and many attorneys say it doesn't cover their overhead costs.

The plan Born announced Monday would raise the pay to $70 an hour. That increase would cost taxpayers about $33 million over two years, according to state records.

Because of the existing rate, private attorneys often refuse to take cases, leading to delays in getting defendants representation.

In addition, the GOP package would allow counties to hire 61 more assistant attorneys and increase pay for prosecutors and correctional officers. All of these are great ideas, but it begs the question “Where were the GOPs on these things the last 8 years?”

It’s not like low pay and understaffing in these offices is something that just cropped up. 2 years this week, the GOP-controlled Joint Finance Committee received a report showing how much Wisconsin courts were relying on private defenders, and that even at the paltry fee of $40 an hour.

In the 2017-19 budget, the Public Defender Board actually had funding for its own public defenders cut by $2.9 million, but the amount farmed out to private defenders was increased by $6.8 million, admitting that this need and related funding had been underestimated in the past. But the rate paid to private attorneys did not increase.

It was clearly not enough, as the FY 2018 Fiscal Report indicates that the Public Defender Board has to use more than $2 million in fees and other redirected money to pay all the bills for last year. As a result, the Public Defender’s Board asked for $49 million in this next budget in additional money, noting that nearly 40% of cases involving a public defender has to be outsourced to private attorneys due to understaffing and conflicts of interest.

The Legislative Fiscal Bureau explained (on Page 122 of its summary of budget requests) than nearly $40 million of that increase is to bring the pay of private defense attorneys up to the $70-an-hour rate the GOP proposed.

4. PRIVATE BAR ATTORNEY COMPENSATION. Request $16,612,700 annually and modify current law to increase the rate at which private bar attorneys are compensated from $40 per hour to $70 per hour. In addition, grant the SPD authority to modify rules to reflect the changes in the rate. Under current law, private bar attorneys are compensated at a rate of $40 per hour for time spent related to a case, regardless of the case type. The increase in hourly compensation would apply to cases assigned on or after July 1, 2019.

5. PRIVATE BAR COSTS Request $3,036,200 annually as an estimate of funding to pay private bar attorney costs. The State Public Defender employs trial and appellate attorneys who represent clients who qualify for SPD representation. However, staff attorneys cannot represent all clients who qualify for SPD representation. Overflow cases and cases in which staff attorneys may have a conflict of interest are assigned to private bar attorneys throughout the state, at a rate of $40 per hour for time spent related to a case, and $25 per hour for travel. Base funding for private bar and investigator reimbursements is $25,354,100.

In addition to their avoidance of action on this real problem for several years, there’s another reason WisGOP looks dumb and desperate with this announcement yesterday. Where’s this extra money coming from? These guys just passed a $338 million a year unfunded tax cut last week, but they now claim there’s magic money lying around to fund this budget request.

Let me remind you that if that if Gov Evers were to sign off on that unfunded tax cut (which he won’t), there would have to be $1.5 billion in additional money to pay for every budget request in the 2019-21 budget. 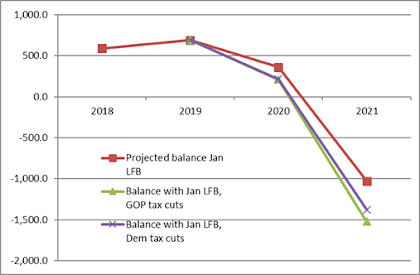 So if we’re going to give the Public Defender Board the money they ask for (and deserve to get), what requests aren’t getting funded? WisGOP needs to be forced to answer that question. This can likely be answered in the full budget, but WisGOP clearly feels the heat from what those answers would be.

Which is why they wanted to get in front of the media with an image of “see, we’re dealing with this problem and can be bipartisan”. Too bad their earlier decisions and buck-passing make it less likely that they can do what they claim they want to do. And even if they do the right thing, it’s more costly in 2019 to do it, and they don’t get a cookie for trying to make up for their past neglect now that we have a governor who actually cares about governing.