I've been meaning to talk about this "Millennial Millions" skit from SNL last month.

Lots to unpack here- starting with one of the 20-sonething contestants, who is a contractor without health insurance.

Host: "What's the name of the start-up?"

Then...they played all the music
And they did all the drugs
And they had all the sex
And they all went to college
And they got all the jobs
And they made all the money
And bought all the houses
AND THEY WON'T EVER DIE.

The goal of the game is for the Milennials not to yell at well-off Boomers who,complain about their situations.

Parrothead Boomer: "She worked as a banker for 30 stable years, and then she got a $8 million severance and moved to Key West."

Boomer: "I had to work. $8 million dollars is not what it used to be so of course I'm taking the Social Security."

Milennial: "You're taking the Social Security? Bitch you are rich!" (Milennial loses)

Milennial: "It feels so funfair"
Host: "Well, maybe you can tweet about it, that'll solve everything. (laughs) I'm just playing. I'm Gen X, I just sit on the sideline and watch the world burn."

Milennial with Master's who works at Burger King: "Oh awesome, that'll cover like half."

Collector Boomer: "He spends his latter years acquiring everything he wanted as a youth. He owns 6 vintage cars and a wall of guitars. But somehow, he's only an orthodontist."

Boomer: "I'd love to retire and free up a job for a younger person, but we got the house in Jersey, the house out on the Cape which is a tax nightmare, and the Scottsdale place. It's too much! What am I supposed to do?"

Milennial: "THEN SELL ONE YOU DUMBASS! NO ONE NEEDS THAT MANY HOUSES!" (storms off)

Now, it's time for the final round.

Host: "Carrie, it's your lucky day. That means you get to play for the Boomer Birthright Bonanza...That's a full-time job, a starter home, no student debt, and we'll throw in the Social Security. In other words, you get everything the Boomers got, just for being born at the right time."

Except that Carrie has to withstand a lecture about student debt from her Dad. Which basically will fall along the lines of this "Old Economy Steven" meme. 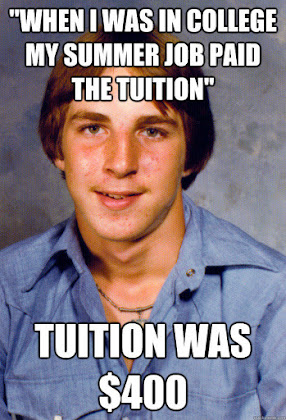 If it wasn't an evil thing to do, and would lead to righties trying to wreck the program, I'd support lowering Social Security benefits through 2030. Not only would it save a ton of money and make Social Security solvent for the next 40 years afterwards, but it would also mean the "Me Generation" can finally start to pay the rest of the country back for the things they have taken. But I'm a big-picture guy and I wont do that.

Of course, making rich people pay the same percentage into Social Security as the rest of us would also solve this issue, and a 70% income tax and/or wealth tax on the ultra rich might stop the problem of the Collector Boomer who can't retire due to having too many homes and stocks to worry about.

CEO Howard Schultz is the manifestation of this Boomer "I took mine and I'm keeping it no matter what happens to you" mentality.

Regardless of his actual intent, the net effect is that Schultz is using his billions to pressure Democrats into nominating a candidate who won't increase his tax burden. https://t.co/YG7pGBVrKU

As someone in his mid-40s that never made enough money to benefit from the '90s bubbles and resulting income increases, I'm just shaking my head at the whole thing. We're off to the side as part of the Middle Children of history. At least we'll hold down the benefit costs in our golden years, since there aren't as many of us.

But you wonder why younger people don't have a lot of trust in capitalism and especially corporate America? When your parents have sold you a lie about how the working world REALLY acts, why should you buy into the rest of the "pay your dues and build wealth" social contract?

It also doesn't help that Boomers have voted really poorly for most of our lives, which left the country and many of the states in the mess we are in today. You can see why so many of us want to see them get off the stage that they've been allowed to command for so long.
Posted by Jake formerly of the LP at 11:14:00 AM