WisGOP plows ahead with tax cut with no budget in mind

Notice that while there’s a one-time carryover of more than $691 million projected for this year, but it falls away very fast, to the point that over $1 billion in additional money (on top of the revenue growth) needs to be found to satisfy budget requests by June 2021.

Now add in the $490 million the GOP’s tax cuts will cost the state in the 2021 Fiscal Year (courtesy of the LFB's memo from last month), and look at the hole that opens up. 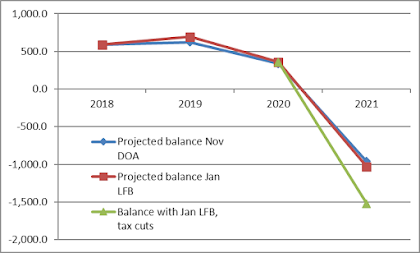 That's a gap of more than $1.5 BILLION that would have to be closed.

This is why I think this unfunded tax cut is intended to be a trap to force Evers to ask for large tax increases or budget cuts heading into the 2022 elections. The “tell” is that this tax cut wouldn’t take effect for another 11 months, until 2020. Why? Because if it hits ahead of time, the reality of the unfunded tax cut causing a budget deficit and changing tax refunds would be known ahead of the 2020 elections, and not happening after them.

Especially given that most economic forecasts indicate weaker economic growth over the next 2 years, not having funds set aside to deal with those fiscal issues is going to make it a double-whammy in Wisconsin. It’s OK to have a hearing to get the information out there, and perhaps Evers can build it into his budget. After all, I want to see the flaws and benefits laid out as well, and perhaps the measure and its effects on other parts of the state budget can be improved when debated as part of the cycle where the tax cut would take effect (i.e, using savings from Medicaid expansion to pay for part of this).

Sorry, GOPs, but we can put this tax cut idea back in the oven until we get it right. Besides, there's a lot of your 2010s austerity mess that the adults have to clean up before we do another unfunded tax cut.

EDIT- In response to MAL's comment below, looks like the Guv also doesn't want an unfunded tax cut.

Lawmakers will hold a public hearing today on a middle class tax plan. @GovEvers says he won't support a plan "that has no plan for funding in the future."

Says he doesn't think he could sign a bill providing a cut that doesn't have a way to fund it in the future.