Last year's record floods are still costing us. And this winter likely will too

There was a minor line item in last week's Joint Finance Committee hearing that was drowned out by the discussion about tax cuts. However, with more snowstorms coming for this week, it seems to be a good time to point it out.

The WisPolitics summary is innocuous enough, but it still notes the decent amount of money that is being added to deal with past weather damage.

The Joint Finance Committee voted unanimously Thursday to give the Department of Military Affairs for a one-time supplement of $2 million to provide disaster assistance to local governments.

It also approved unanimously giving $50,000 to the Kickapoo Reserve Management Board to cover clean-up costs from floods. That money will be transferred from the state forestry account.

Let's go into this a bit more, to get a fuller picture on how this works.

The Department of Military Affairs oversees and pays for recovery efforts associated with weather-related "catastrophes" that generally involve Wisconsin's governor asking the president for a federal disaster declaration. These funds are paid out by the state's Petroleum Inspection Fund, which gets its money from a 2-cent-a-gallon tax that is paid on gasoline and other fuels, and the Legislative Fiscal Bureau says that for the last 5 years, there's been a dedicated amount of money set aside in that fund for disasters. Usually the amount set aside is sufficient, and anything that's not used for disasters can be carried over. 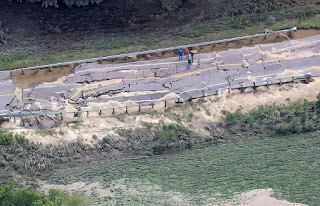 Gotta fix this with some kind of money.
And just like we saw in 2011 and 2012, 2018 is a year where the disaster aids to local government are going over the amount that's in the fund, due to record flooding and other crazy weather that we've seen in the last 6 months.

While available FEMA money can pay up to 75% of certain public infrastructure costs, that still leaves a lot of costs that the state and local governments have to pick up. and the DMA account had already been used up for the 2019 Fiscal Year. Which is why the Joint Finance Committee was asked to give another $2 million out of the petroleum fund last week.

In order to provide funding for currently approved claims in excess of available balances under DMA's SEG continuing state disaster assistance appropriation, and in order to have additional balances to address additional disasters in 2018-19, DMA is requesting that the Committee transfer $2,000,000 SEG on a one-time basis in 2018-19 to DMA's state disaster assistance appropriation. Revenue for the request would be provided from the petroleum inspection fund. Based on a review of the petroleum inspection fund, a sufficient balance exists to support the DMA disaster assistance request. Approval of the current request would reduce available fund balances to support the other activities supported by the fund. The petroleum inspection fund's estimated closing available balance for 2018-19 is expected to be $14.0 million. The $14.0 million expected balance is before consideration of any transfer under DMA's request.

….In 2018-19, through February 1, 2019, the Wisconsin Disaster Fund had expenditures of $799,100, approved claims pending payment of $869,600, and a balance of $600. The Department estimates that additional disasters, such as winter weather or spring floods, could incur $291,200 in eligible claims this fiscal year. Based on current petroleum inspection fund balances, revenue is available to support the request.

But with polar vortex cold and numerous snowstorms in the first 6 weeks of 2019, it sure seems like there is going to have to be more money that the state will have to come up with to help local governments to deal with weather events for the 2019-20 Fiscal Year as well. Which makes me wonder if more money is going to have to be set aside from the Petroleum Inspection Fund or other sources in the next budget, and whether that will limit the ability of the state to continue to divert money from the petroleum fund to make up for deficits in DOT for road repairs and other needs. 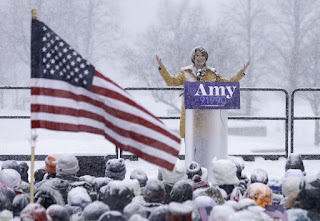 This is coming across the St. Croix soon enough.
In addition to the money to the Department of Military Affairs, the Joint Finance Committee voted to pay more funds to deal specifically with the cleanup in Western Wisconsin from the record flooding in August and September. The funds went to the Kickapoo Valley Reserve, which manages around 8,600 acres in Vernon County with money derived from camping and other activities for the natural area.

The Kickapoo River valley has often been subject to severe flooding events. In August and September of 2018, severe rainfall events contributed to record-breaking totals of rain in the Kickapoo River watershed. The National Weather Service reports an estimated 12.68 inches of rain fell in Viroqua (12 miles west of the KVR) from August 16 through September 6. Further, measurement of the Kickapoo River in La Farge (immediately south of the KVR) showed a peak estimated flow of 27,800 cubic feet per second on August 28, breaking the previous record of 22,100 set on June 8, 2008. From August 15 to September 15, the average cubic feet per second was 863, compared to the river's August-September historical average of 161 from 1939 through 2016. The final crest of the river was measured at 19.42 feet, breaking the previous record of 15.78 feet also set on June 8, 2008.

KVR reports that damages from flooding included washed out trails, sinkholes, downed trees, damage to signage and boundary markers, debris accumulating under bridges, erosion at parking lots and river access sites, and other infrastructure damage. The Department of Administration (DOA) Bureau of State Risk Management reports that damage associated with the flood is not covered by insurance.

The LFB summary indicates that FEMA wants to have its disaster assistance funds to go to repairing infrastructure and private homes, so the KVR has to pay for the repairs to their lands themselves. The problem is that they don't have enough money available to do so, even after reducing staff for wildlife management duties.

In response to the anticipated deficit, KVR reports it is already reducing LTE hours from February to April, which will limit invasive species control work and timber stand improvement. KVR also reports it is considering other funding options, including fundraising with the Friends of the Kickapoo Valley Reserve, although these funding sources may be limited.

So the Joint Finance Committee took $50,000 available from the Forestry Account to pay for it - the same Forestry Account that Walker and WisGOP replaced property taxes with state tax dollars in the last budget, to the tune of approximately $90 million a year.

This $2,050,000 in extra costs aren't a big deal in the overall budget picture, but additional weather events will cause another area of added expenses that weren't part of the budget requests for this year. And in a time where roads, education and other services are also in need of reinvestment after 8 years of neglect, the extra costs and needs that crop up with these storms add to an already-complicated situation.

Interesting that the GOPs on the Joint Finance Committee ignored this reality when they decided to advance a $338 million-a-year unfunded tax cut last week, isn't it? And it makes for yet another reason we should hold off on that one until we look at the full budget picture in the coming months.
Posted by Jake formerly of the LP at 3:46:00 PM