I was heartened to read yesterday that Governor Evers will use his budget to step up and ask to do something that we haven’t seen in several years in Wisconsin - put a lid on the exploding costs of the state’s school voucher program and make them play by the same rules public schools do.

These proposals are part of a framework that allows Wisconsinites to have an honest conversation about the varied funding methods of voucher programs while not impacting enrolled students. They will also result in reduced property taxes. Currently, the state has two parallel systems of education that utilize public dollars and provides funds to about 600 schools it otherwise would not.1 Participation in the voucher program increased by 8.7% in the 2018-19 school year while the total cost increased 12.3% to an estimated $302 million.

Those numbers come from the Legislative Fiscal Bureau’s paper on the various voucher programs in the state, and the same paper also shows that more than $104 million is being taken out of public schools this year as a result of the voucher scam.

The amounts of money involved in school vouchers has consistently gone up since Scott Walker and the rest of the Wisconsin GOP took power in 2011 (with a boost from Betsy DeVos’s campaign contributions). In fact, over the last 7 years the tax dollars that are both going into vouchers and being funneled out of public schools has more than doubled. 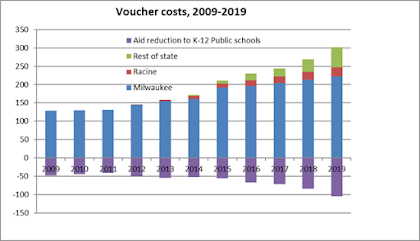 Much of that $104 million taken out of public schools has been made up by increasing property taxes, because as we saw in a story from a couple of weeks ago about how smaller, more rural districts are being hurt by vouchers, you don’t close a public school because a few students in each grade are on vouchers.

But losing some students to private schools doesn’t necessarily mean a district has reduced costs, said Portage Community School District Business Director Peter Hibner. Since 2015, Portage has had more than 20 voucher students per year. Participation jumped to 36 this year, taking with them almost $300,000.

“Let’s say you have 30 kids district-wide under that program,” Hibner said. “That might only be a couple at each grade level, so it’s not like we can have less staff for anything else because we have a couple less students.”

So how will Evers propose to stop this voucher theft? Basically by using an old GOP strategy – “cutting it” by stopping its growth in funding or students.

Preliminary numbers indicate there are 26 schools and 3,242 students in the RPCP and 213 schools and 6,878 students in the WPCP in the 2018-19 school year. The total state general aid reduction and resulting property tax impact, attributable to pupils in the WPCP and RPCP in the 2018-19 school year is $68.3 million.6 Special Needs Scholarship Policy Changes & Restrictions: This proposal prohibits new students from enrolling in for the Special Needs Scholarship Program (SNSP) beginning in FY21. Through this program, private schools can receive a 90% reimbursement for special education services while public schools only receive a 25% reimbursement. The total state general aid reduction attributable to pupils in the SNSP in the 2018-19 school year is estimated at $8.4 million. This provision will reduce property taxes by $4.6 million in FY21 compared to current law.

Evers also wants to freeze all new charter and “virtual” schools for the next 4 years, and would force all voucher schools to have full accreditation along with the same teacher licensing rules that public schools have. Lastly, Evers would include a line item on property tax bills throughout the state that shows just how much state aid is taken away from a property owner’s local K-12 public school district.

Naturally, this angers a Wisconsin GOP that has relied on those DeVos donations to be sent to them through convicted criminal Scott Jensen and other right-wing front groups. These guys have gradually increase voucher funding and enrollment so that casual voters don’t make the connection between vouchers and the bad effects that follow. If nothing else, Evers is making them bring that fact out into the light.


Republicans in the Legislature have spent years helping build the voucher program. We will not support a budget that includes this proposal.

Gotta give Fitz credit for honesty, I guess.

I also love how the GOPs and their allied voucher front groups are doing their typical sob story about how “you’re not letting poor kids have choices.” In addition to not being true (vouchers still exist, and the kid can attend any public school he/she likes under open enrollment) it is quite a rich statement coming from Republicans. Those race-baiting regressives have constantly cut public education and local services, and have rigged the state’s economic system to increase the already-wide disparities in outcomes and opportunities that plague Wisconsin.

I think most Wisconsinites see through the voucher scam these days. It’s likely a reason why suburban Milwaukee turned more towards Democrats in 2018 than anywhere else in Wisconsin, costing pro-voucher Scott Walker a 3rd term in which he certainly would have further privatized K-12 education.

For #WIGov, Scott Walker (R) went from a 6% win in 2014 to a 1% loss this year. He improved up north but the southern metros moved away from him. For example, in both Dane (Madison) & Waukesha (Milwaukee suburbs) counties, he did 10-12% worse this time. These were crucial losses. pic.twitter.com/n5kAtotBq9

Sure, Evers’ plans on vouchers are unlikely to get through the gerrymandered GOP Legislature, especially with a bought-off crook like Robbin’ (De)Vos running the Assembly. But it throws down the marker, forces the GOPs to justify this absurd expense of money and explain why we have 2 separate, tax-funded school systems. It will also make the Republicans reveal what needed services and programs should be cut to keep pumping more tax dollars to these “Jesus rode a dinosaur” schools.

And maybe a few voters in those gerrymandered areas wake up and realize that their GOP legislators aren’t giving a damn about investing in education in their community, but instead are using our tax dollars to kick back money to their campaign donators. And if so, the Milwaukee suburbs might not be the only traditionally red area of the state that turns bluer.