Jon Peacock of the Wisconsin Budget Project on what we need to look at with the Foxconn contract,

Defenders of the Foxconn deal often claim that the contract protects state taxpayers because Foxconn won’t receive any credits if it doesn’t meet job thresholds. Although that claim is true in part, it’s also very misleading. More than a third of the planned subsidies — $1.6 billion — including the state and local infrastructure spending for the project, has little or no tie to job creation. 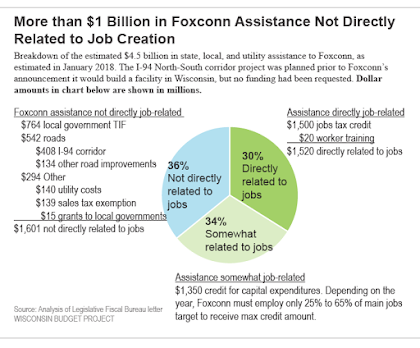 3. The state and local subsidies per job are much higher if Foxconn falls well short of the job creation targets.
Under the contract, Foxconn can get the maximum capital investment credits even if it falls well short of each year’s job target. For example, Foxconn can receive the maximum annual cash subsidy (“tax credit”) of nearly $193 million per year even if it employs only 520 people at the end of this year (25 percent of the target level) and 1,820 at the end of 2020 (which is just 35 percent of that year’s target of 5,200 jobs). Under that lower employment scenario, the job creation payments to Foxconn would be lower, but the investment subsidies are much less tied to the job levels.

In light of that factor, plus all the upfront subsidies that are independent of job creation, the total cost of state and local subsides will be much higher per job if Foxconn builds a smaller plant with fewer employees than initially promised. The huge subsidies for each job created are a concern for many reasons, including the fact that the revisions to Foxconn’s plans make it far less likely that project will have the purported employment benefits for blue collar workers and communities of color in southeast Wisconsin.

And one of the interesting things that Peacock predicts is that Foxconn might be the ones to want to change the deal we have in Wisconsin, especially as it appears that Foxconn will not hire anywhere near as many people as they claimed 18 months ago.

5. Foxconn has even more reason to renegotiate the contract than the state. Both the state and Foxconn have strong reasons to want to renegotiate the contract, but Foxconn has the greater incentive to strike a new deal. First, it now appears very unlikely that Foxconn can hit the minimum job targets that it needs to reach to be eligible for the payroll tax credits. Second, the changes in the type of LCD factory seem to make Foxconn ineligible for most of the investment tax credits it was expecting over the next several years. If anyone is initiating an effort to strike a new deal, it should be Foxconn.

If Foxconn truly intends to go ahead with revised plans for the Mt. Pleasant facility, it will probably seek a new contract that helps it qualify for a larger portion of the nearly $3 billion of cash payments authorized by Governor Scott Walker and the legislature. Whether the state should agree to any changes of that nature is an open question because a better option might be to cut the state’s losses. On the other hand, renegotiating the contract could be an opportunity to close loopholes and change other contract terms to make it a less costly and less risky deal for state taxpayers.

And even people associated with Foxconn don't seem to be sure about what's going to happen in Racine. Note these comments from Foxconn VP Bill Mitchell at a business event in Milwaukee last week, which shouldn’t make anyone feel better.

“I’m not saying this is true of Foxconn,” he said, “but for any company, if you wait until you figure out all of the details before you leave the runway, sometimes in this day and age with the advance of technology, you’re not going to be able to continue to be competitive.

“And so that’s from our perspective, or from my perspective personally, what I mean by that is you’re — we’re flying the airplane and we’re designing and building it as we go because the demands are changing constantly.”

If you read between the lines of the story, Mitchell seems like someone far in over his head, as he walks out of an interview sessions when a reporter asks him about Gov Evers speaking at the conference. Then Mitchell returns, and seems to speak out of turn over what’s actually happening at the Racine County plant, which the Journal-Sentinel’s Rick Romell connects the dots on.

Mitchell briefly talked about the television-set assembly operation Foxconn has launched in a leased building in Mount Pleasant while its planned manufacturing and research complex is under construction a few miles away.

He didn't have figures on production volume but said he believed the TVs being assembled in Mount Pleasant are under the Sharp brand.

What Foxconn is doing with those television sets remains an unanswered question. Foxconn has owned Sharp since 2016 but does not hold the rights to sell Sharp-branded TVs in the U.S.

So any TVs being assembled in Racine County are being sent out of the country? And when Romell asked Foxconn what they knew about this, they wouldn’t respond.

No matter what Potemkin Village Foxconn tries to construct, it’s pretty obvious that this will never be a major manufacturing plant. Which means the facility isn’t what was portrayed to to Wisconsinites, and certainly won’t come close to being the game-changer WisGOPs tried to portray it as.

The only thing “game-changing” is the massive taxpayer-fronted price tag that is already sunk into this scam, and the lesson that it gives to the rest of the nation on what not to do.
Posted by Jake formerly of the LP at 7:27:00 PM