Friday afternoon, the Wisconsin Department of Revenue came out with their figures for January 2019. And the bad figures in December didn't get much better in the first of the new year. These numbers are not adjusted for the 1.6% rate of year-over-year inflation.

Which means that Wisconsin is up 2.3% on revenues for the year, well behind the projections of 3.3% revenue growth given by the Legislative Fiscal Bureau last month. If we fall short on revenues, then there's less money to carry over into the start of the 2019-21 biennium.

Which is yet another reason Tony Evers was right to veto the Wisconsin GOP"s unfunded tax cut this week, because THE MONEY MIGHT NOT BE THERE. If you assume that we stay at the same amount of year-over-year growth in tax revenues that we have so far in FY 2019, and then use the same rate of growth that the LFB assumed for the next 2 fiscal years, note how the hole in the budget grows That's even if corporate revenues continue to improve (I'm also going to assume the other taxes and revenues end up in line, which they generally are at this point). 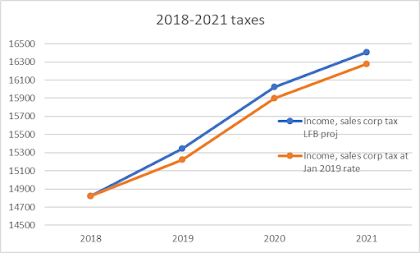 It doesn't look like much, but that's a gap of more than $120 million in each year. If that holds over the course of the budget, it's about $375 million. Given what we're already seeing in this tax filing season, things may be much more in peril than what that chart shows. The IRS dumped their latest information on tax refunds for this year, and the gap between 2019 and 2018 keeps growing.

That last stat is the one that jumps out at me. Nearly $40 billion hasn't gone back into the hands of consumers, and is instead being used to pay off the debts that have resulted from the GOP Tax Scam. And a decent amount of that money will be out of the hands of Wisconsinites, which will likely limit consumer spending in our economy in the coming months.

But while the smaller refunds might "raise" tax revenues at the Federal level, that does NOT apply at the state level. As someone in state government has reminded me, "Federal and state tax codes are different", and some of the deductions that Wisconsinites won't take advantage of at the federal level (like mortgage interest and charitable donations) are things they can use at the state level. Which means Wisconsin could have a typical amount of refunds in the next few months, which lowers overall revenues.

So as a result, we should hold off on any tax policy until the new LFB projections come out in May, and do it through the regular budget process. Because I'm starting to think that things may be a lot more tenuous than what was projected a month ago, which would make it foolish to dig a deeper hole on the underfunded services and infrastructure that the last governor left us with. 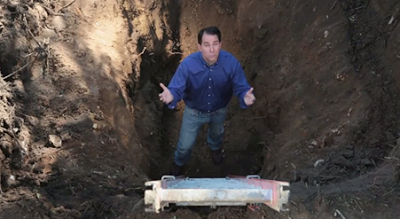