SALT in the wounds - $323 billion in deductions going away

As tax season moves forward, we continue to see that the (possibly) unforeseen side effects of the GOP’s Tax Scam keep coming back to bite a large numbers of filers.

Let’s start with a Treasury Department report from this week that quantified how the GOP Tax Scam is ending one particular deduction for a sizable amount of Americans.

The Treasury Inspector General for Tax Administration (TIGTA) estimated that if the $10,000 cap on the deduction had been in place in 2017, roughly 10.9 million taxpayers would have been unable to deduct about $323 billion in state and local tax payments on their federal tax forms.

TIGTA said that its estimate is based on examining 2017 tax filings whose itemized deductions exceed the standard deduction amount under the new tax law and identifying the number of returns that claimed more than $10,000 in SALT deductions.

Blue-state politicians have amplified their calls to restore the full SALT deduction in the past few weeks, linking the cap on the SALT deduction to complaints from taxpayers about smaller refunds and higher taxes.

Trump has also expressed openness to revisiting the cap on the SALT deduction. But key congressional Republicans said they do not plan to reconsider the deduction cap, which largely impacts high earners.

The SALT cap is a big reason why many individuals are writing surprise checks to the IRS this tax filing season, because what used to be tens of thousands of dollars in deductions now is limited to $10,000, and if someone doesn’t have a large amount of mortgage interest on top of that, then they end up taking the standard deduction, which is already assumed with the paychecks that people receive (raises hand). 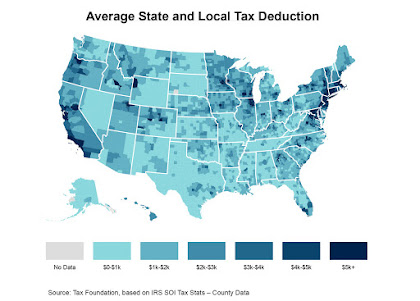 That fact makes these recent words from the Trump Administration all the more dishonest.

"There was absolutely no manipulation of the tables and no 'phantom windfall' in taxpayers' paychecks," J. Brady Howell, a senior adviser in Treasury's legislative affairs office, said in a letter this week to Senate Democrats.

The Treasury Department and the IRS released new withholding tables early last year to reflect the major changes in President Trump's tax-cut law, such as the lower tax rates and the increase in the standard deduction….

Democrats have argued that the administration designed the withholding guidance so that people would see bigger paychecks throughout the year last year ahead of the 2018 midterm elections, but that taxpayers then would find that they owe the IRS money instead of receiving a refund when they file their taxes this year. They argue that the administration should have not touched the withholding tables last year.

1. The IRS didn’t inform individuals that took a SALT deduction of more than $10,000 about the changes (they obviously have the data), and that those people may want to take out more taxes in their paychecks because they were likely to have less income to deduct when they filed their taxes.

2. While the Trump Treasury Department changed the withholding tables to reflect the new rates, they didn’t change the number of exemptions for tax filers, and that was a main part of the Tax Scam’s changes. For example, married couples without kids could list 2 personal exemptions (a person and his/her spouse) on their W-4’s at work, and each were worth a reduction of $4,050 in their taxable income.

Once the Tax Scam was passed, those personal exemptions went away, but those individuals were not required to file new W-4’s that reflected the end of those exemptions, and the Treasury didn’t require them to do so. So many unsuspecting people (who care about 500 other things going on in their lives beyond filling out tax forms) ended up having thousands of dollars end up untaxed in their paychecks, and now is paying back that difference all at once during tax filing season. 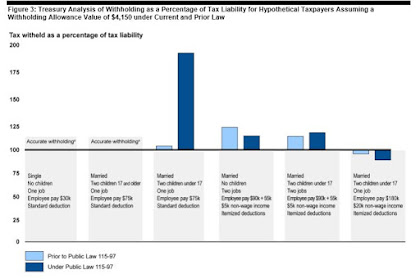 How did this prediction work out?

Now that people are writing surprise checks for thousands of dollars, the Trump Administration and other GOPs are saying “Well, you should have known better.” How would the casual person have known better? The Trump Treasury didn’t let them or their employers know about it.

The only positive that the GOP Tax Scam might give in the coming months is that we might actually see a slight uptick in revenues compared to this time last year…because of more payments coming in and fewer tax refunds coming out (nearly $40 billion as of last week). So I suppose we may see the growing deficit level off for a few months.

But that's small consolation to a lot of middle-class and upper-middle class people, and all of the ads that I see saying "use your refund to buy things" sound very hollow these days. And you have to wonder how much these IRS checks are going to take out of consumer spending in a time when our retail sales and the housing market already seems to be slowing down.
Posted by Jake formerly of the LP at 7:52:00 PM