GOPs have to make up a study to oppose Medicaid expansion. They can't do it honestly.

I want a bit of space to discuss the recent WisGOP push to claim that expanding Medicaid in the state wouldn’t work out and hurt Wisconsinites. These memes are the result of a report that claims while Medicaid expansion would save tax dollars, it would actually raise premiums on those people that are currently insured, because the insurance companies would charge them more to make up the difference.

There’s a lot wrong with that idea, and not just because it’s a cynical “divide and conquer” framing designed to make the currently insured resentful of people that would get insurance through Medicaid. But I’d rather talk about the people making these claims, as they are not operating on the level, and the claims of “higher costs and premiums under Medicaid expansion” are specious enough on its face.

You can read the bilge for yourself, but let’s keep in mind the authors of this “study”. The Wisconsin Institute for Law and Liberty is well-documented as a Bradley foundation front group that seems to exist for no reason than to spread GOPper-ganda and file lawsuits to promote WisGOP’s cause. 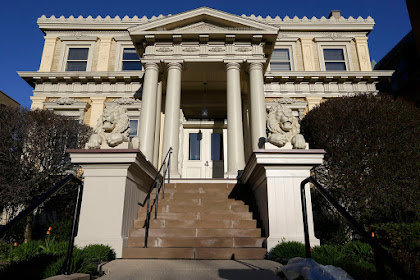 How does this building avoid paying property taxes to Milwaukee?
As for the "academic", Noah Williams is a charlatan whose entire current existence at UW-Madison is based on outside funding from similar right-wing oligarchs. Let’s go back to August 2017, after Williams had advised the failed presidential campaigns of Scott Walker and Marco Rubio, to an article in the Capital Times that described how CROWE was set up.

Professor Noah Williams is director of the Center for Research on the Wisconsin Economy, established in July. It operates out of the Social Sciences Building, 1180 Observatory Dr.

A member of the UW-Madison faculty since 2008, Williams was previously on the faculty at Princeton University and received his Ph.D. at the University of Chicago. (known for its backing of right-wing doctrines for decades).

Williams’ analysis of the controversial Foxconn plant proposal, made public on Aug. 17, concluded that the high-tech plant could return nearly $4 for every $1 of a proposed $3 billion state tax subsidy.

Oooh, that analysis is not aging well, Noah. Even Robbin’ Vos is admitting that Foxconn isn’t going to end up anything like it was promised to be.

The “findings” of the report were rebuked by an actual UW academic who, unlike Williams, isn’t paid to make up stuff to support a certain conclusion.

“This study has several methodological and analytical flaws that substantially compromise the validity of its conclusions,” Friedsam said.

Friedsam in an email said the study omits evidence of better health outcomes associated with previous BadgerCare expansions, and pointed to mathematical errors and problems with the study’s conclusion that health care spending is higher in Medicaid expansion states.

She added most economists reject the reasoning that private sector health care costs would increase because health care providers would pass on costs from low Medicaid reimbursement rates to consumers.

Let me also forward you to a summary from John Peterson at Democurmudgeon, who frequently discusses health care in detail, and includes in his recent post a list of findings from the Kaiser Family Foundation on states that have expanded Medicaid.

I won’t go over all of those items from the KFF like John did, but a few that are relevant here are:

3. Economic measures: No significant increases in state spending from state funds as a result of the expansion through 2015 ... Medicaid expansions result in reductions in uncompensated care costs for hospitals and clinics as well as positive or neutral effects on employment and the labor market.

4. Medicaid expansion is having a disproportionately positive impact in rural areas in expansion states, where growth in Medicaid coverage and declines in uninsured rates have exceeded those in metropolitan areas.

Let me note that the 2 Congressional districts in Wisconsin that have the largest number of near-poverty individuals that get their insurance from the ACA exchanges are in rural Wisconsin, and especially Northern Wisconsin. This map has darker colors for the areas with the most people that get health insurance through the Obamacare exchanges. 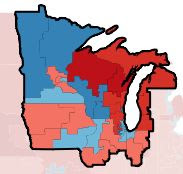 Those are the individuals most likely to benefit from Medicaid expansion, and many are “represented” by Koched-up Republicans that keep them from getting the increased care and options that Medicaid expansion would give them.

Let me also relay a couple of other findings by the Kaiser Foundation via the Democurmudgeon.

8. Found expansion to be associated with improvements in disparities by race and income, education level, and employment status

9. Significant reductions in out-of-pocket medical spending. Multiple studies found larger declines in trouble paying as well as worry about paying future medical bills in expansion states relative to non-expansion states ... significantly reduced the percentage of people with medical debt, reduced the average size of medical debt, reduced the average number of collections, improved credit scores, reduced the probability of having one or more medical bills go to collections in the past 6 months, and reduced the probability of a new bankruptcy filing, among other improvements in measures of financial security.

10. Documented provider reports of newly eligible adults receiving life-saving or life-changing treatments that they could not obtain prior to expansion.

All 3 of these realities are conveniently ignored by Williams and the Bradleys. They are wrong to think costs will go up because under Medicaid expansion, people will be more likely to maintain their health with more regular doctor’s bills, and insurance companies won’t have to make up for as many people that go bankrupt and can’t pay their bills.

It’s obnoxious to see Republicans and their oligarch funders lie through their teeth to avoid saving Wisconsin taxpayer dollars by not expanding Medicaid. But the fact that they have to make up this garbage is more proof that they know they’re on the wrong side of public opinion and reality.

Evers should absolutely include Medicaid expansion in the budget next week, make the Koched-up GOPs continue to flail with absurd reasons to oppose it and come up with $400 million + to cut to make up the difference. And if Dems keep slapping back hard on these fake think tanks and the GOPpuppets that hide behind their “research”, maybe they can put some holes through the Bubble of RW BS that envelops far too much of Wisconsin these days.