Two quick items from this week illustrating the classiness of this state's business community.

Start with this news from yesterday, where bankrupt Wisconsin retailer Shopko announced that their store closings had multiplied.

Shopko will close almost 70 percent of its locations between now and mid-May as it attempts to reorganize and emerge from bankruptcy.

The company published a list this week that indicates it will close 251 stores, more than twice the number of stores Shopko identified for closing in mid-January. The updated list now includes 42 stores in Wisconsin....

Shopko and its affiliate companies filed for bankruptcy protection from creditors on Jan. 16 in U.S. Bankruptcy Court in Nebraska, citing assets of less than $1 billion and debts between $1 billion and $10 billion.

The Ashwaubenon-based retailer announced plans to close stores, sell its pharmacy assets and spin off its optical centers into standalone locations. The changes were designed to enable the company to emerge from bankruptcy with the ability to continue operating with a slimmed-down, more profitable footprint across the Midwest and Northwest United States.

Now go back to something I wrote about back in May 2016, where I followed up on a WKOW report in Madison which noted that the parent company of Shopko had received $1 million in job creation writeoffs from the Wisconsin Economic Development Corporation, but were outsourcing jobs within 2 years.

In that post, there was a comment from "lufthase", which pointed out the interesting GOP connections with that company.

Why ShopKo, you ask? It probably isn't all the little 3-figure WIGOP donations. Look higher up the foodchain. ShopKo is owned by Specialty Retail Holdings, which is in turn owned by Sun Capital Partners... and they happened to give a cool $950,000 to Romney's PAC (Restore Our Future), plus another $212k to the RNC. Very likely they were also generous with some of Walker's preferred groups (WICfG?).

And within 7 years of these publicized WEDC handouts, the vulture capitalists in charge of Shopko are going to throw several hundreds of Wisconsinites out of work and depress the tax base in whole lot of state communities. What a deal, huh?

And then there's this item that shows up in the middle of a Mother Jones' article from today that shows how right-wing donors withheld their contributions to GOP members of Congress in 2017 until the GOP Tax Scam was passed into law, followed by those donors opening up the purse strings to kick back the added cash in their pockets.

That's not surprising, and the Kochs, Adelsons and U-Lines had been well-documented in their carrot-stick approach in regards to the tax scam. But a couple of more familiar names closer to home caught my eye in this graphic, which tracked donations to GOP politicians and front groups in the 2 months the Tax Scam was being debated. 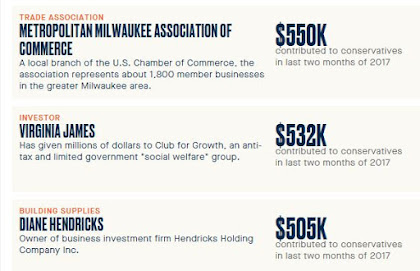 The MMAC and Diane Hendricks? Classy! And what did the Milwaukee metro area get for job growth in the 1 year after the Tax Scam was passed into law?

Well under 1/2 of the US rate, in a state where we've been in the bottom half for job growth for 7 straight years under policies that the MMAC and Diane Hendricks has backed every step of the way. Maybe instead of throwing more than half a mil on GOP politicians (and a lot more before the end of 2017), maybe the MMAC's corporate members COULD HAVE HIRED SOME PEOPLE instead of having Milwaukee massively lag the rest of the country.

Oh, but WisGOPs tell us that despite the Tax Scam's major corporate tax cuts and the sizable tax cuts to rich individuals, that if they get their M&A giveaway reversed at the state level, it'll be catastrophic for these companies? BULLSHIT. The massive donations, bad job growth and failed WEDC giveaways tell me that their free ride needs to be ended, and these lazy oligarchs can take a seat in the back for a long while.

Instead, let's allow people that actually work jobs, actually believe in fiscal responsibility, and believe in quality of life to be the ones that get to direct economic policy for a while in this state.